How to Avoid Cost Pitfalls by Monitoring APIs in AWS Lambda

The modern software world runs on application programming interfaces, otherwise known as APIs. There’s an API for everything: charging a credit card, sending an email, finding an address on a map, or hailing a taxi.

Likewise, the huge computing power of the cloud is entirely accessible via multiple layers of programming interfaces, including HTTP services and language-specific SDKs.

Cloud vendors such as AWS have thousands of endpoints available to every developer in the world and modern businesses ought to embrace these existing services to stay productive. Instead of trying to reinvent the wheel, businesses should focus on the core values and differentiators for their specific market and simply purchase, adopt and reuse the remaining services required from third parties that have proven themselves in their given niche.

This principle stands at the core of the philosophy behind serverless architecture: focus on the crucial bits. Serverless tech has a low barrier of entry and was designed with the intention to require little boilerplate code to use. This helps to explain why so many reliable APIs are an inherent part of serverless applications today. AWS Lambda functions, for their part, are used by developers as the glue between cloud services and internal as well as external API calls.

One thing to keep in mind when adopting APIs, in general, is performance. Most API calls are usually synchronous requests over HTTP or HTTPS. They may be fast to execute, but they may also be slow and responsiveness is not manifested in the API definition itself.

Moreover, the latency may vary over time, as APIs can crash at seemingly random intervals or under higher loads. Throttling strategies might also kick in once the workload passes a given threshold.

This aspect of performance is arguably more decisive in the serverless world than ever before, as slow downstream APIs for serverless platforms have numerous implications:

Luckily, a lot is possible to prevent and mitigate such issues.

There are several strategies to assess the impact that the performance of a third-party API has on your serverless application.

While just getting started with a new API, it makes sense to research if the supplier has provided a performance SLA or not. Regardless of the answer, the next step is to execute the target calls and measure the latency profile. You should strive to do so well in advance, before signing up for a new service. Finally, it’s worth running a load test to emulate your target workload over an extended period.

Your job is still not done even after an application is successfully deployed to production. For any non-trivial application, it’s worth investing in monitoring tools and best practices. A monitoring toolkit provides both real-time and historical perspectives on the performance of your dependencies as well as their impact on application usability and cost.

The following section gives a sneak peek of such activities.

Let’s consider a sample application that processes telemetry from connected vehicles. Each vehicle sends periodic messages, which end up in the AWS cloud. A single AWS Lambda receives a message and executes the following steps:

It’s a reasonably straightforward application and yet it depends on four external APIs: two AWS services and two third-party endpoints. Here, we will implement a prototype of such an application and link it to an Epsagondashboard to see what kind of insights we can get about its performance.

Timeline of a Single Invocation

Let’s start by calling my AWS Lambda once, then find that invocation in the Epsagon dashboard and display the timeline view:

The Epsagon dashboard: A Timeline view of a single call

You can see that a single invocation took 827 milliseconds to complete. This time was entirely spent on waiting for the API calls to complete. You can also clearly see the breakdown of the execution time between the four dependencies and that the geocoding and email sending is slower than the calls to DynamoDB and S3.

The timeline view looks very familiar to any developer who has ever worked with performance and network tabs as part of a browser’s developer tools. And it’s beneficial for a similar purpose: hunting down the culprit of slow execution.

It’s worth mentioning that you don’t have to track the calls manually. All the data is collected automatically by the Epsagon library once you plug it into the Lambda.

The above was just one measurement, which might not be very representative of reality. The next step is to see how the target AWS Lambda behaves over time. Let’s set up a test to execute the function several hundred times over several minutes.

It’s easiest to use AWS’ API Gateway and invoke the function via HTTP. Alternatively, you could use an SQS queue or another asynchronous trigger, but monitoring behaves similarly in all cases.

After the test, go ahead and navigate to the Architecture Map page: 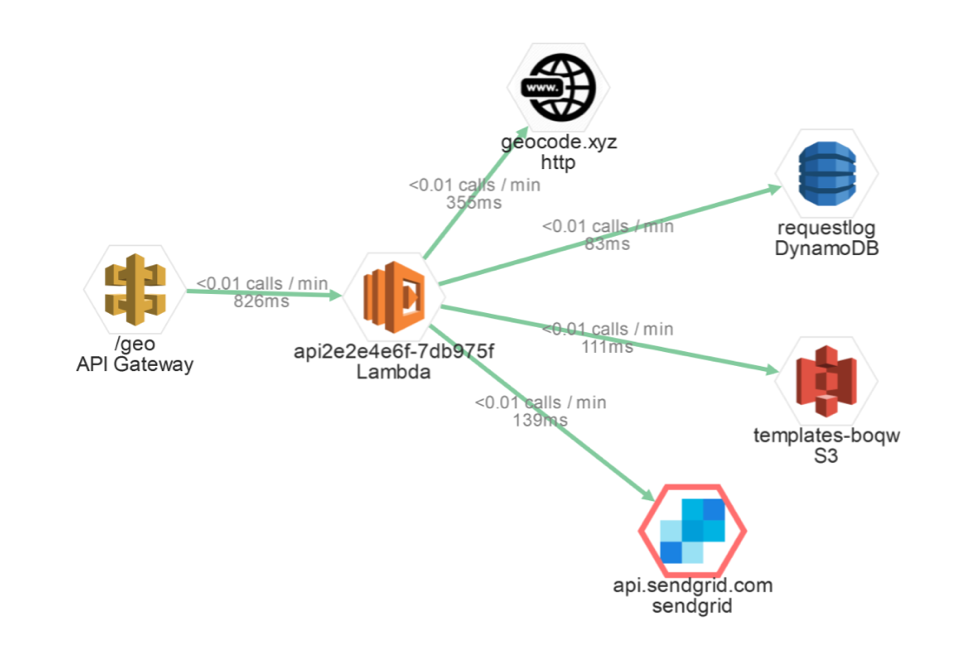 The preceding Epsagon dashboard gives you an aggregate view of all recent function executions. In this case, the numbers happen to be quite similar to the previous test. About 800 milliseconds of invocation time on average with geocoding being the slowest call. SendGrid calls seem to go faster on average, but the red border indicates that some of the requests failed.

This also points to a potential problem, which you would need to investigate. You may want to take some concrete actions based on the collected data, such as trying another geocoding service to see if it is faster for a comparable price.

You can estimate the cost of your application based on the predicted number of invocations multiplied by the price for 900 milliseconds of execution time. This function spends all the time waiting for I/O operations to complete and it’s not CPU- or memory-heavy. Therefore, it makes sense to provision smaller sizes of AWS Lambda instances.

Finally, you may want to break down your “monolith” function into multiple functions that are interconnected with queues. Smaller single-purpose functions have several benefits, including higher resilience and potentially lower cost.

Almost every serverless function relies on one or many API calls and a combination of other cloud services and third-party applications. The latency and stability of those calls directly affect the AWS Lambda function, both in terms of performance and cost.

Be sure to test the performance of any newly adopted API before relying on it. In addition, you need to monitor the latency, reliability, and cost of the API calls in production. It is important to optimize the structure of your application to avoid long-running calls on the synchronous path that is observable by end-users. For better cost manageability and higher resilience, complete the executions as fast as possible and delegate the remaining work to queue- or event-based functions.

How to Set Up AWS Lambda with SQS - Everything You Should Know!